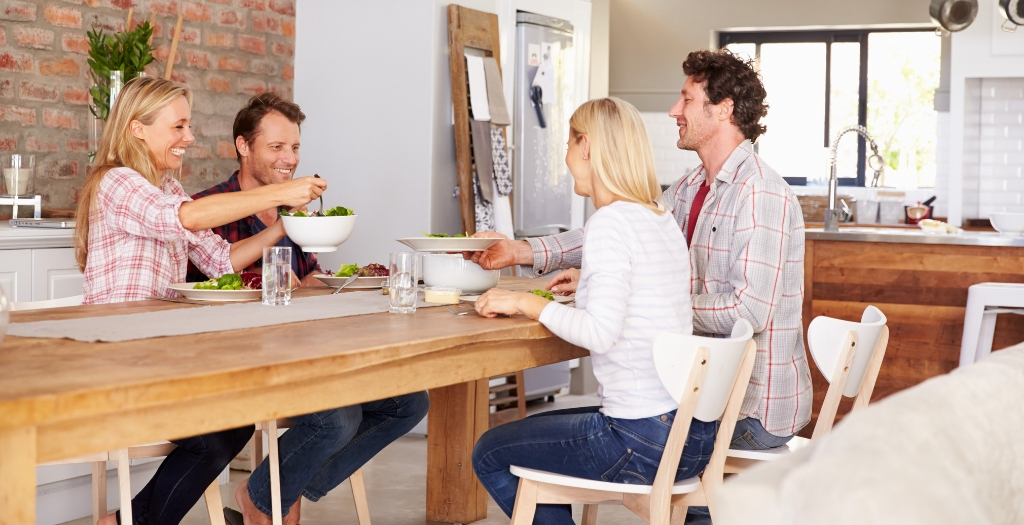 Not that long ago, home dining was quite a formal affair, particularly in households with staff. Several courses, fine china, and polished cutlery were the order of the day, and this wasn’t confined to families of Downton Abbey grandeur! Even in regular households, families typically dined together with a degree of formality. Much has changed and an effect of that has been changed to home dining spaces.

For many homes, gone are the days when families convened at a set time and a homecooked meal was prepared for all. In fact, we’re as far away from it as most could have imagined, even just a generation ago.

No longer confined to a traditional dining room, many families eat far more informally, and this also means eating different things at different times. It may also be that dietary awareness and of course fads are part of this big change, where some family members forego meat or gluten, for example.

Instead of a week of meals planned and shopped for, now it’s far more casual, with dining spaces to match. Instead of meat and two veg in the dining room, it may be a toasted sandwich or a bowl of pasta at the kitchen breakfast bar.

Increasingly common is not sitting somewhere specific to eat at all and simply eating in front of the TV of an evening. In many ways, this is a bit of a shame and where conversation has been replaced with the hypnotic effect of the gogglebox.

The change in requirements for home dining spaces is something we’ve seen at Parker Home. While we plan and build many an extension, sunroom or garage conversion, they are mostly to achieve more living space (although wetrooms are still incredibly popular in the place of garages), rather than to enable an enhanced family dining experience.

When we do create new home dining spaces, it’s often to house something akin to a Wagamama arrangement that a traditional dining layout.

And maybe that’s the biggest change. When families do come together, it’s a far more casual and social concern than being around a large table. Gatherings have become more of a buffet party event than a seated one.

One of the few things that’s guaranteed in life is change. Whether it’s for the better maybe in the eye of the beholder! One can’t help but wonder if, or when, the pendulum may swing back the other way towards a more considered ritual of mealtimes.

Why installing a wetroom is a great investment
Scroll to top